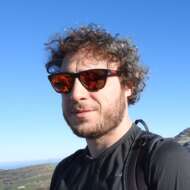 Freelance writer with a passion for the wild and remote parts of the Earth.

Chris Scaife has travelled extensively. His experience in the great outdoors includes jungle trekking in Papua New Guinea, mountaineering in the Alps and the Andes, reaching the summit of every English mountain over 2,000 feet, lengthy wild camping trips in Norway and the Scottish Highlands, multi-day cycling adventures in Britain and Europe, and cave exploration across the world.

He has descended many of the UK’s most difficult caves and has been involved in significant underground discoveries in the north of England and in Spain. In July 2019 he was part of a caving expedition to Armenia, which included the discovery and exploration of the third longest cave in the country.

Chris has been scuba diving on five continents in a number of exotic locations, including deep wreck dives in the USA, Colombia and Vanuatu, diving with sharks in Australia and Malaysia, and diving amongst volcanic vents in New Zealand.

Cycling is his main mode of transport and he spends much of his time on quiet and dusty roads in the north of England, often with a heavily laden pannier rack.

He is also experienced in mountain biking, rock and ice climbing, kayaking, skiing and snowboarding, and has a keen interest in wildlife, both locally and internationally.