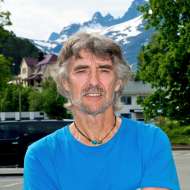 Climber with a long history of exploration from Arctic to Antarctic but especially the UK, Norway, Middle East and North Africa. Ex-instructor and guide; outdoor magazine contributor; Partner and designer in Troll Climbing Equipment, 1965 - 95; author; photographer.

GuidebooksClassic Norway – Climbs, Scrambles & Walks in Romsdal, Norway
Treks & Climbs in Wadi Rum, Jordan
Jordan – Walks, Treks, Caves, Climbs & Canyons
Walks in Palestine & the Nativity Trail
Walks, Treks, Climbs & Caves, Al Ayoun, Jordan
Books Troll Wall – the untold story of the British first ascent of Europe’s tallest rock face ("One of the greatest ever achievements by British climbers", Joe Brown)
Quest into the Unknown, “a life of adventure that is the very definition of true exploration”, ("An excellent read from a man who has changed the face of adventure travel, Chris Bonington).
Adventures in the Northlands (Kindle).

Award “Quest into the Unknown” was Highly Commended by the OWPG (Outdoor Writers & Photographers Guild). The judges noted that, “It reads like the outline for a film, a detailed and sometimes deeply personal account of a life spent in the singular pursuit of new climbing and outdoor adventures, spanning the globe and bridging the gap between the old world of make do and mend crag rats and the modern world of sport climbing and trekking.”